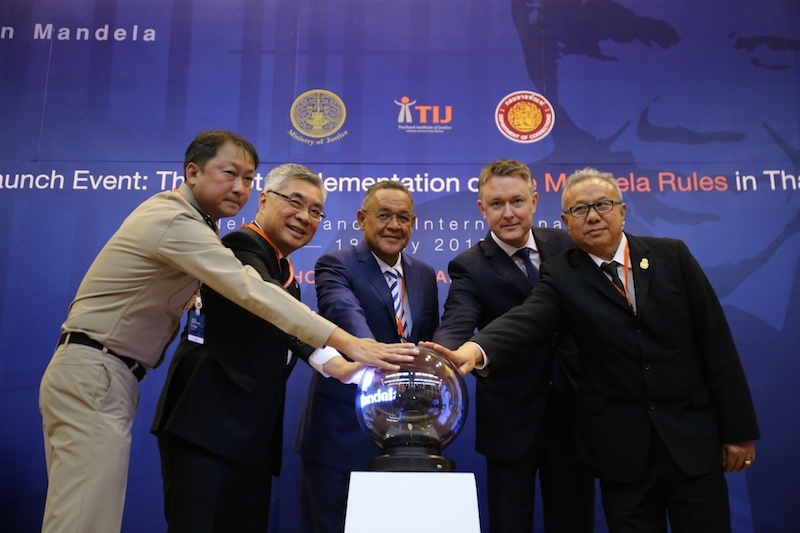 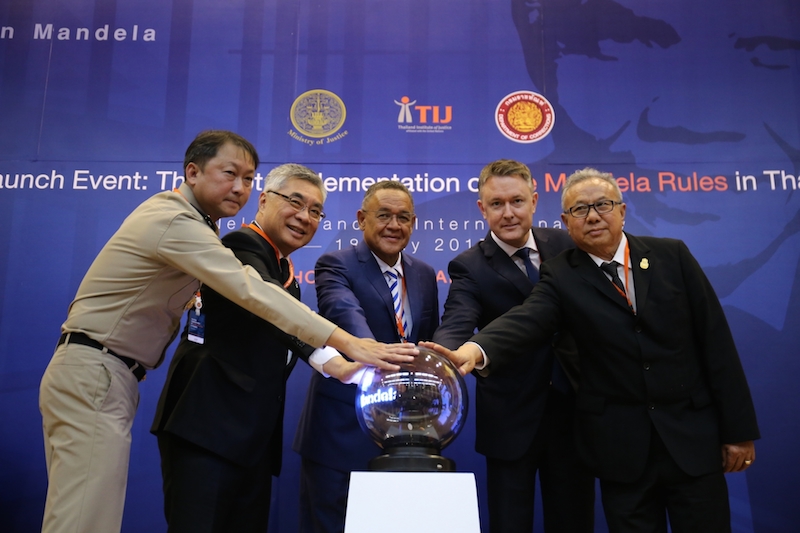 Bangkok – July 18, 2017 – On Nelson Mandela International Day, July 18, the Department of Corrections (DoC), Ministry of Justice, announced it has co-ordinated with the Thailand Institute of Justice (TIJ) to fully implement the Mandela Rules, the United Nations Standard Minimum Rules for the Treatment of Prisoners, for the first time in the world. The Thonburi Remand Prison is the pilot model and will fully implement the Mandela Rules within year of 2018. Protection standards for the inherent dignity of prisoners without discrimination are not only a good practice, but also a tool to promote better lives for prisoners after they are released and to reduce the problem of recidivism. 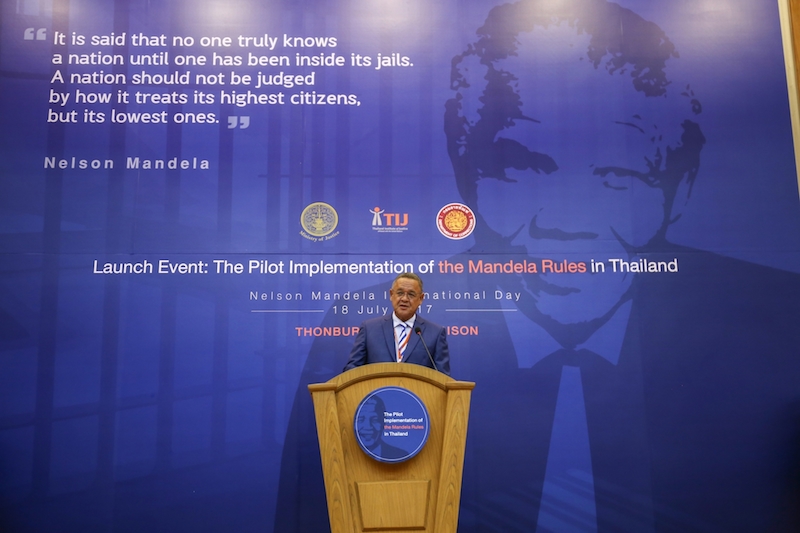 During the previous decade, prisons in Thailand were overcrowded due to a progressive increase in the number of prisoners. At present, Thailand has more than 286,000 prisoners (a 55% increase compared to 2008), while the facilities in Thailand can support a maximum of 245,000 prisoners. This problem affects the management of prison facilities. However, the DoC, as an end bureau of judicial administration, is focusing on the improvement of prison administration in accordance with standards. Recently, it began to formally implement the Mandela Rules, a global standard, as a pilot project.

Mandela Rules and Thailand
The Mandela Rules are the UN Standard Minimum Rules for the Treatment of Prisoners, with five principles for respecting the rights of prisoners:

Before the Mandela Rules were developed, the Standard Minimum Rules for the Treatment of Prisoners (SMR) was adopted in many countries. The SMR was developed in 1955. In December 2015, some member states of the United Nations initiated a program to update the SMR to be more practical and reflect social conditions by improving treatment of prisoners in accordance with Human Rights Principles. Thailand is one of those 16 countries, and one of four active players in co-sponsoring the drafting and review process for the revision, now known as the Mandela Rules, and proposing the rules for approval by the United Nations. The rules are named to honor Mr. Nelson Mandela, the late President of South Africa, who spent 27 years in prison during the course of his struggle for global human rights and equality. 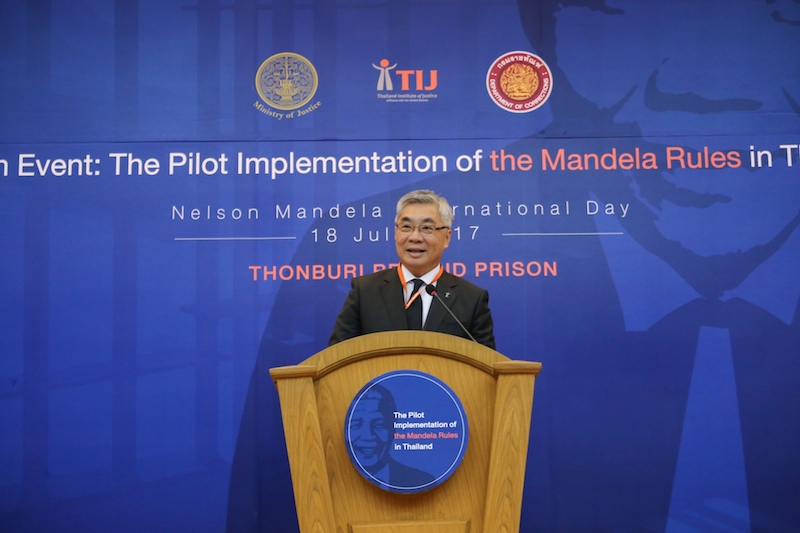 Implementation by the Department of Corrections (DoC)
The DoC is formally implementing the Mandela Rules to ensure the treatment of prisoners is in accordance with international standards by co-ordinating with TIJ to provide knowledge. An assessment will follow using the “Assessing Compliance with the Nelson Mandela Rules: A Checklist for Internal Inspection Mechanisms of the United Nations Office on Drugs and Crime (UNODC).”

Mr. Ayuth Sinthoppant, Deputy Director-General, Department of Corrections, revealed, “The Department of Corrections has focused on the improvement of prison management standards. We previously supported some parts of the improvement process according to the Mandela Rules. We are now committed to putting the Mandela Rules into full practice. Thonburi Remand Prison was selected as the pilot prison because of its qualifications and readiness. Successfully leveraging these management standards will become an important step in adopting the Mandela Rules in other prisons and correctional institutions in Thailand.”

In accordance with the Mandela Rules, the DoC is improving its operations by employing the Sentence Plan throughout its whole system. This ranges from proper prisoner classification and systematic & humane prisoner control to behavioral development of prisoners based on the integration of behavioral information and preparation before they are released. The DoC has established preparation centers in 17 prisons and correctional institutions nationwide, integrating related parties including public and private entities and the social sector to operate these preparation centers.

Mr. Yodsaphon Sutham, Prison Warden of Thonburi Remand Prison, explained, “As an operator under the Mandela Rules, the prison has divided the implementation into seven phases: 1) Project planning; 2) Preparation to promote, support, and improve the prison according to the UN Standard Minimum Rules for the Treatment of Prisoners;
3) Announcing our intent to employ the Mandela Rules in the pilot prison;
4) Implementation of the Mandela Rules; 5) A prison audit; 6) Summarizing and assessing the pilot program; and 7) Extending the program to other prisons and correctional institutions. The pilot prison plans to achieve full implementation of the rules and pass the assessment within year of 2018.”

TIJ and Mandela Rules: From Policy to Concrete Implementation
Dr. Kittipong Kittayarak, Executive Director, Thailand Institute of Justice (TIJ), said, “TIJ, as an academic organization for the judicial process and one of the United Nations Crime Prevention and Criminal Justice Programme Network of Institutes (PNIs), plays a role as a medium to convey international knowledge into local practices by engaging in global policy development, conducting research, providing policy consultation, and arranging training to enhance the capabilities of operators in Thailand and the region in terms of standards for the treatment of prisoners. TIJ is actively participating in this change.”

Last year, TIJ and Penal Reform International (PRI) co-arranged the Southeast Asia Regional Consultation on the Implementation of the Mandela Rules. It provided high-level representatives from the Department of Corrections and other prisons in Southeast Asia an opportunity to discuss potential issues and challenges in implementing the Mandela Rules. They also discussed guidelines for putting the rules into practice and exchanging good practice guidelines for prison administration.

“The model prison project under the Mandela Rules was developed following the model prison under the Bangkok Rules (the United Nations Rules for the Treatment of Women Prisoners and Non-custodial Measures for Women Offenders), initiated by Princess Bajrakitiyabha and proposed by TIJ for adoption by the United Nations General Assembly. During the course of the project, TIJ and the DoC implemented the Bangkok Rules starting in 2015. Correctional officers were provided with education. Prisons and women’s correctional institutions were encouraged to take gender differences, including pregnancy, childbirth, and newborn care, into account for prison administration and the treatment of female prisoners. During 2015 and 2016, six model prisons passed assessment, which were the Uthai Thani Central Prison, Phra Nakhon Si Ayutthaya Central Prison, Chiang Mai Women’s Correctional Institution, Correctional Institution for Female Drug Addicts, Chon Buri Women’s Correctional Institution, and Samut Songkhram Central Prison,” concluded Dr. Kittipong. 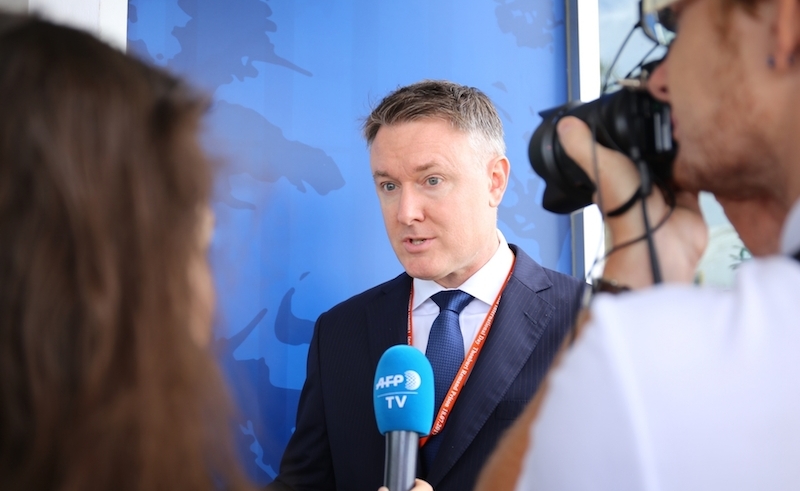 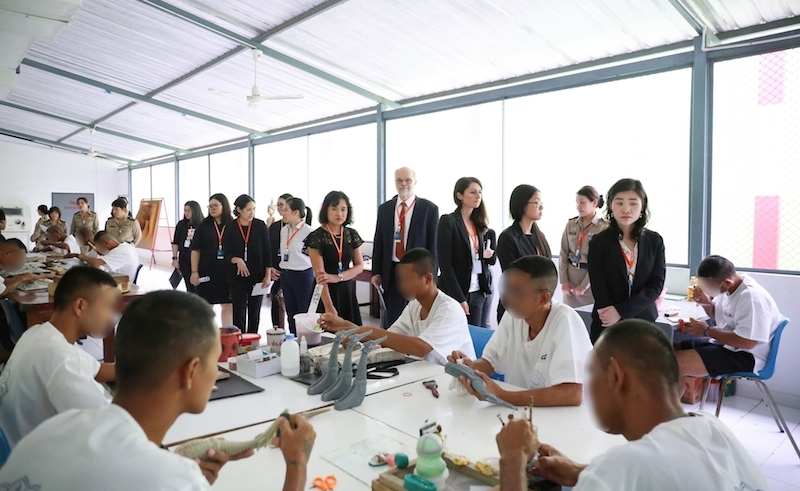 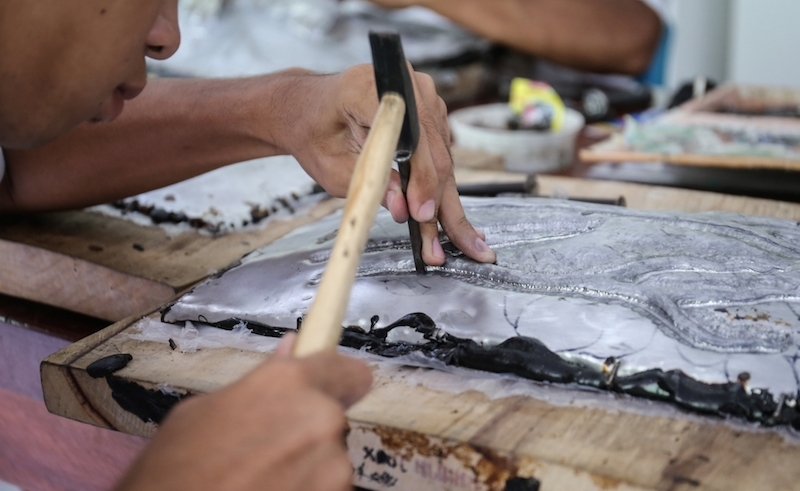 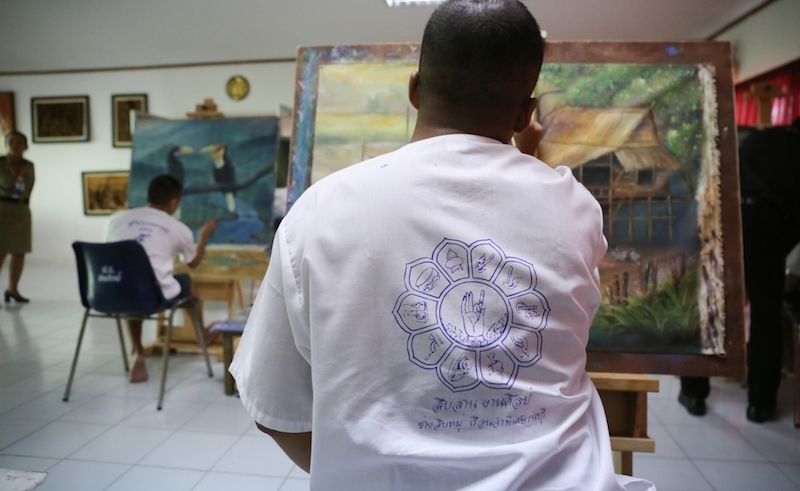 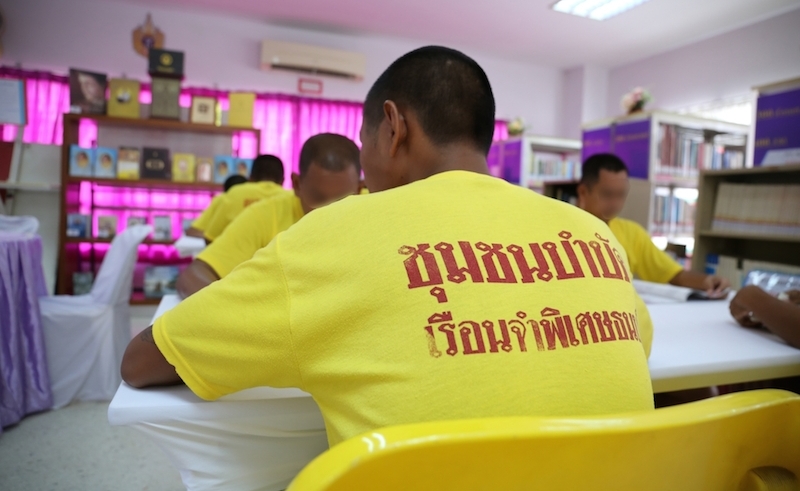 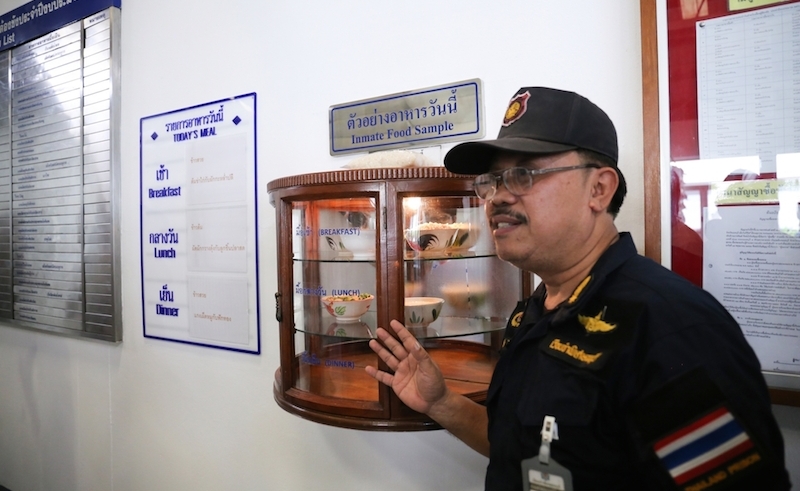 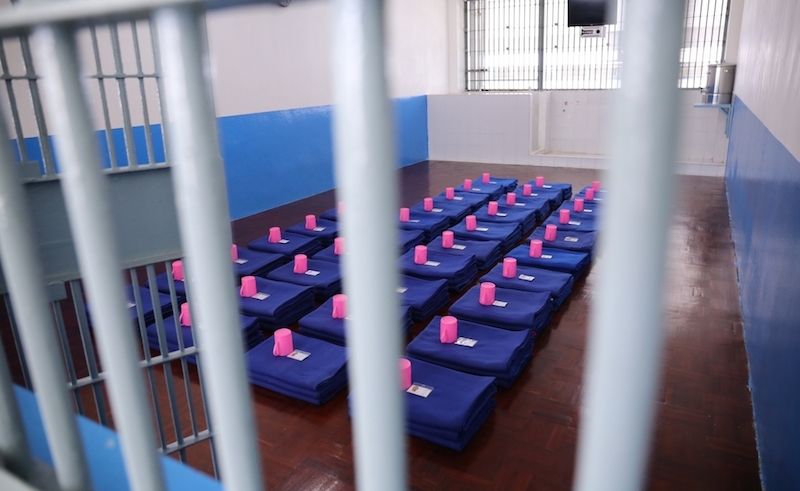