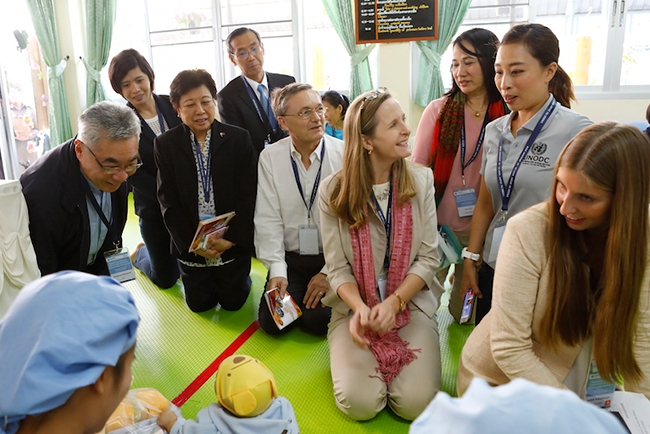 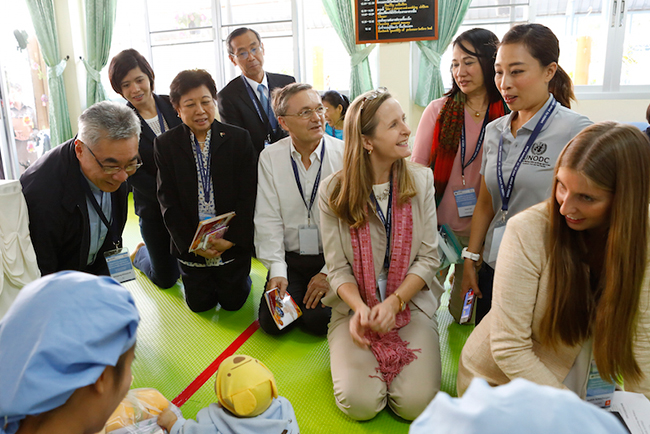 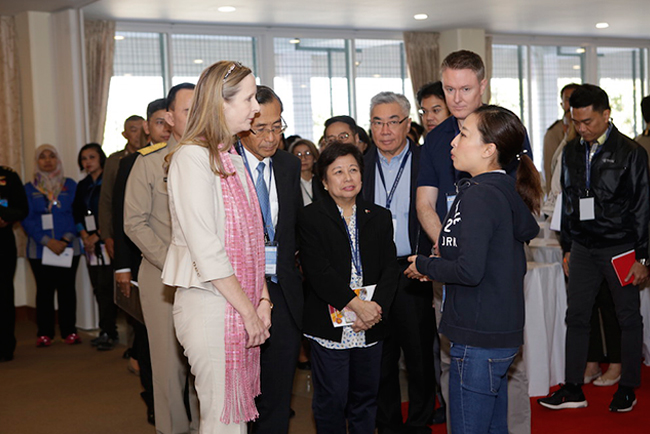 The visit was arranged to highlight and consider initiatives of the Government of Thailand and the Kamlangjai or Inspire Project to improve conditions in Thai prisons, starting with recent pilot projects to assist those incarcerated in the Chiang Mai Women’s Correctional Institute.

Thailand is home to approximately 10 per cent of Southeast Asia’s population but currently has 40 per cent of its prisoners, the vast majority of whom are serving sentences for drug related offences. Women are vulnerable to particular social factors including discrimination and exploitation that lead them to involvement in crimes, and to a prison system that does not take into account their needs because it was never designed with those needs in mind. 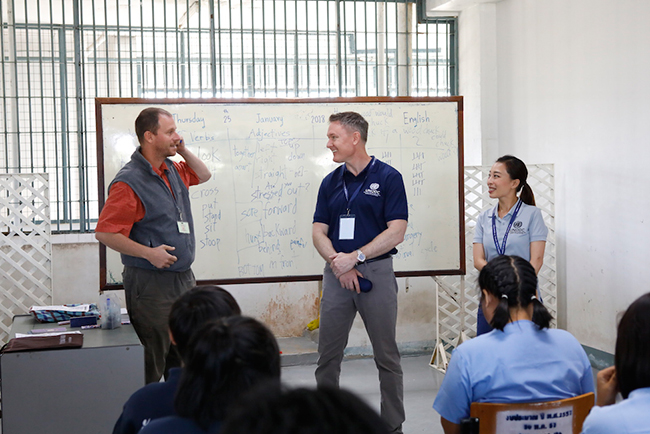 Recognizing a different approach was necessary, Princess Mahidol and the Government of Thailand worked closely with UNODC during the development of the Bangkok Rules on Women Offenders and Prisoners that were adopted by the UN General Assembly in 2010, and are continuing the partnership to advocate for implementation. The Bangkok Rules aim to ensure “the fundamental dignity of female prisoners, treating them with compassion and understanding during their incarceration, while contributing to safer communities by preparing them for life after their release.” 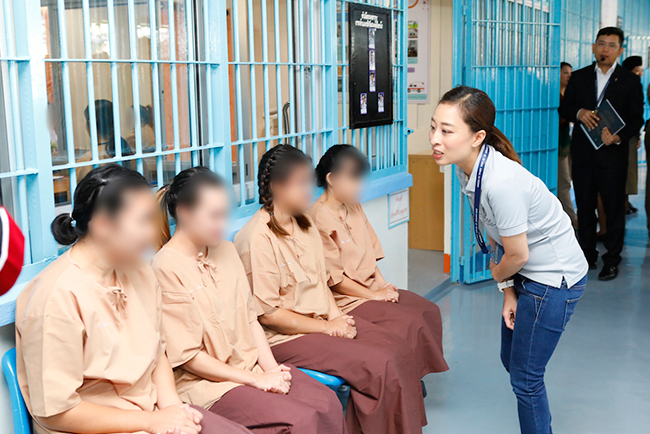 In remarks made at the start of the visit, Princess Mahidol stated “as UNODC Goodwill Ambassador in Southeast Asia I hope to promote understanding that the rule of law in the region is not only about prosecuting and punishing offenders. We have to ensure fair and equitable justice, understand the reasons people are ending up in prison, and we also have to address the specific needs of women in prison like those we are meeting here today. They have incredible potential to contribute to society and communities, and we need to support them to do so.” 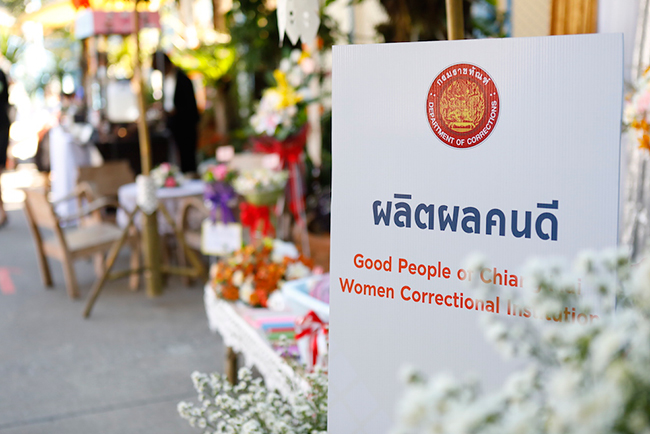 The vocational training centre inside the prison has recently been expanded and improved to help prepare inmates for life outside prison by equipping them with skills to make a living once they leave. Training and certificates are offered in massage and spa treatments, weaving and textiles, cooking, and in garment production and alterations – trades that enable a viable income. At the same time healthcare facilities have been upgraded to meet the specific needs of women inmates. 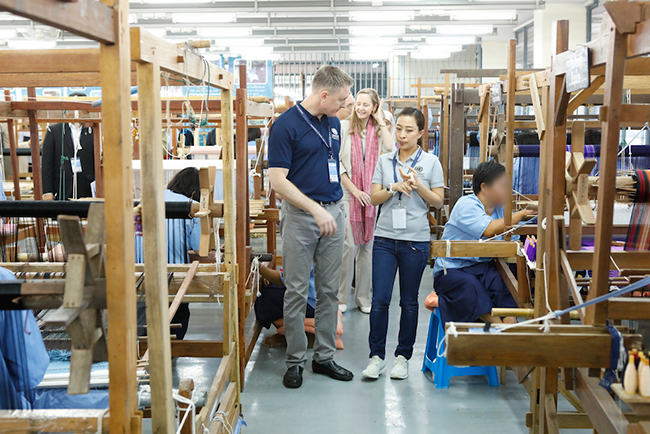 Jeremy Douglas, UNODC Regional Representative, noted “the rehab and health facilities and programmes we have seen here in the Chiang Mai women’s prison are something we would encourage country wide. They are making a real difference.” He added “This is a good start and a model for other Thai prisons to look to, but also for the prison systems of other countries in the region to consider. Promoting the Bangkok Rules and the Mandela Rules is part of a larger criminal justice reform agenda that we are advancing with Her Highness in Southeast Asia.”

Dr. Kittipong Kittiyarak, Executive Director of TIJ, commented “it is vital to the wellbeing of these women, and their families and communities, that the next step for them will be an opportunity that takes them out of the circumstances that led them to be imprisoned in the first place. The success of this programme will be measured in lower recidivism rates, but more importantly in lives transformed.” 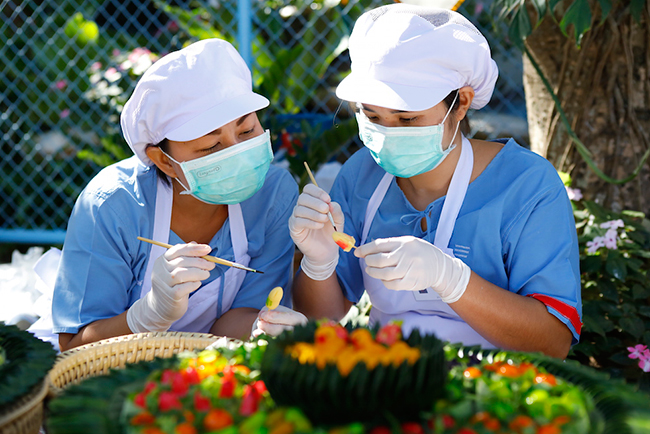 Working as a UNODC Goodwill Ambassador for the Rule of Law in Southeast Asia is part of Her Highness Princess Mahidol’s commitment to help advance the United Nations Sustainable Development Goals and the 2030 Agenda in the region.