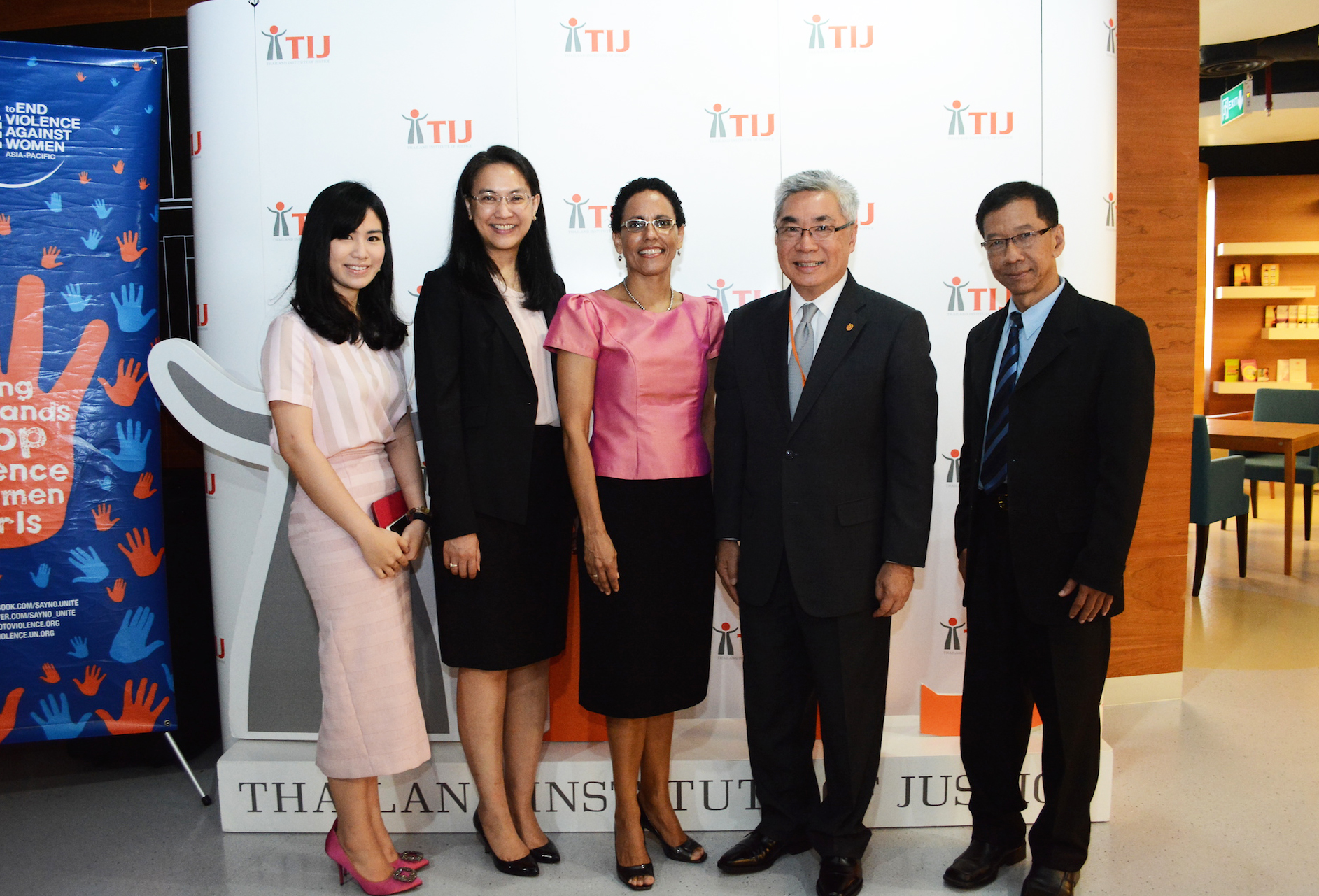 24 November 2014, Bangkok – As to welcome this year’s International Day for the Elimination of Violence against Women, Thailand Institute of Justice (TIJ) joins hands with the United Nations Entity for Gender Equality and the Empowerment of Women (UN Women) to announce the launch of their partnership for promoting women’s rights and equality in Thailand through 2 campaigns – “#SpeakUpWomen” and the world-renowned “HeForShe”. The former aims to raise public awareness on sexual violence being under reported and to encourage women to speak up. The project also presents a creative toolbox containing useful information for victims of sexual violence, relevant authorities and practitioners, and the public. The latter‘s goal is to promote gender equality, encourage and engage men to join and commit to take actions against all forms of discrimination towards women and girls. Moreover, the 2 organizations sign a Memorandum of Understanding to assert their firm standings on the gender equality and women’s empowerment commitments, combating against all forms of discrimination and violence against women and girls.

Dr. Kittipong Kittayarak, Advisor to the Prime Minister and a member of the Executive Board of the Thailand Institute of Justice said, “The shocking findings found in researches conducted by TIJ, UN Women, and several statistics presented by distinguished research institutions in Thailand, have shown that Thailand is ranked 36th from 75 countries with most physical violent acts reported, and ranked 7th from 71 countries with most sexual assaults committed. It is also worth noting that, in Thailand, a woman is raped every 15 minutes, resulting in 30,000 rape cases a year with as low as 4,000 cases being reported and just only 2,400 cases with offenders being arrested. As a consequence, TIJ recognizes the current problems and initiates the #SpeakUpWomen campaign to launch its creative toolbox providing useful information and guidelines that will help improve the services quality of the prosecutors, police, social workers, non-government organizations, relevant government officials, medical professionals, family members of the victims, as well as empowering female victims of sexual violence and helping them gain a better understandings towards Thailand’s criminal justice system regarding their rights and access to justice, which can significantly avail them to make better informed decisions.” 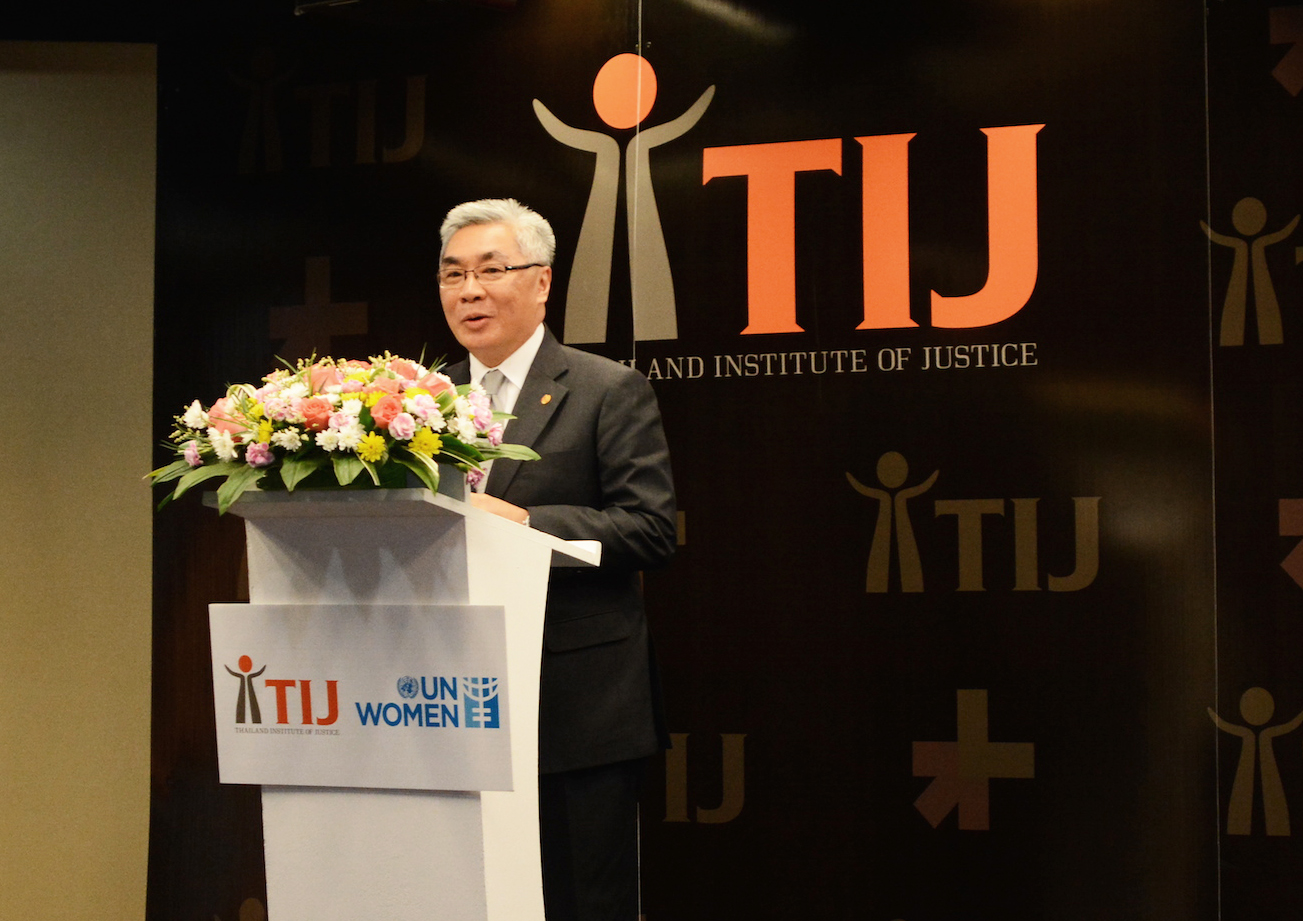 “Apart from TIJ’s #SpeakUpWomen, we are very pleased to partner with an international organization like UN Women upon promoting ‘HeForShe’ in Thailand.  ‘HeforShe’ is  a global campaign encouraging gentlemen all over the world to recognize the importance of women’s rights and gender equality. TIJ feels tremendously honored to be a part of this project. This is also a great opportunity for us to enhance the image of Thailand’s criminal justice system as well as strengthening and affirming good relationships between national and international organizations,”
Dr. Kittipong Kittayarak added.

Ms. Roberta Clarke, Regional Director of UN Women for Asia and the Pacific and Representative in Thailand said, “UN Women is the United Nations organization mandated to promote gender equality and the empowerment of women.  Aiming to realize substantive equality and the fulfillment of women’s human rights, UN Women works on the normative framework and operational activities-- in advocating for gender-sensitive laws and policies and in transforming attitudes and practices that reinforce gender discrimination.  UN Women is delighted to receive such great support from TIJ in promoting the ‘HeForShe’ Campaign in Thailand, especially amongst the justice system actors.  Women’s human rights cannot be attained if women do not have access to gender sensitive justice systems and administration.  We do need partnership from men in all sectors to make gender substantive equality a lived reality for women,” 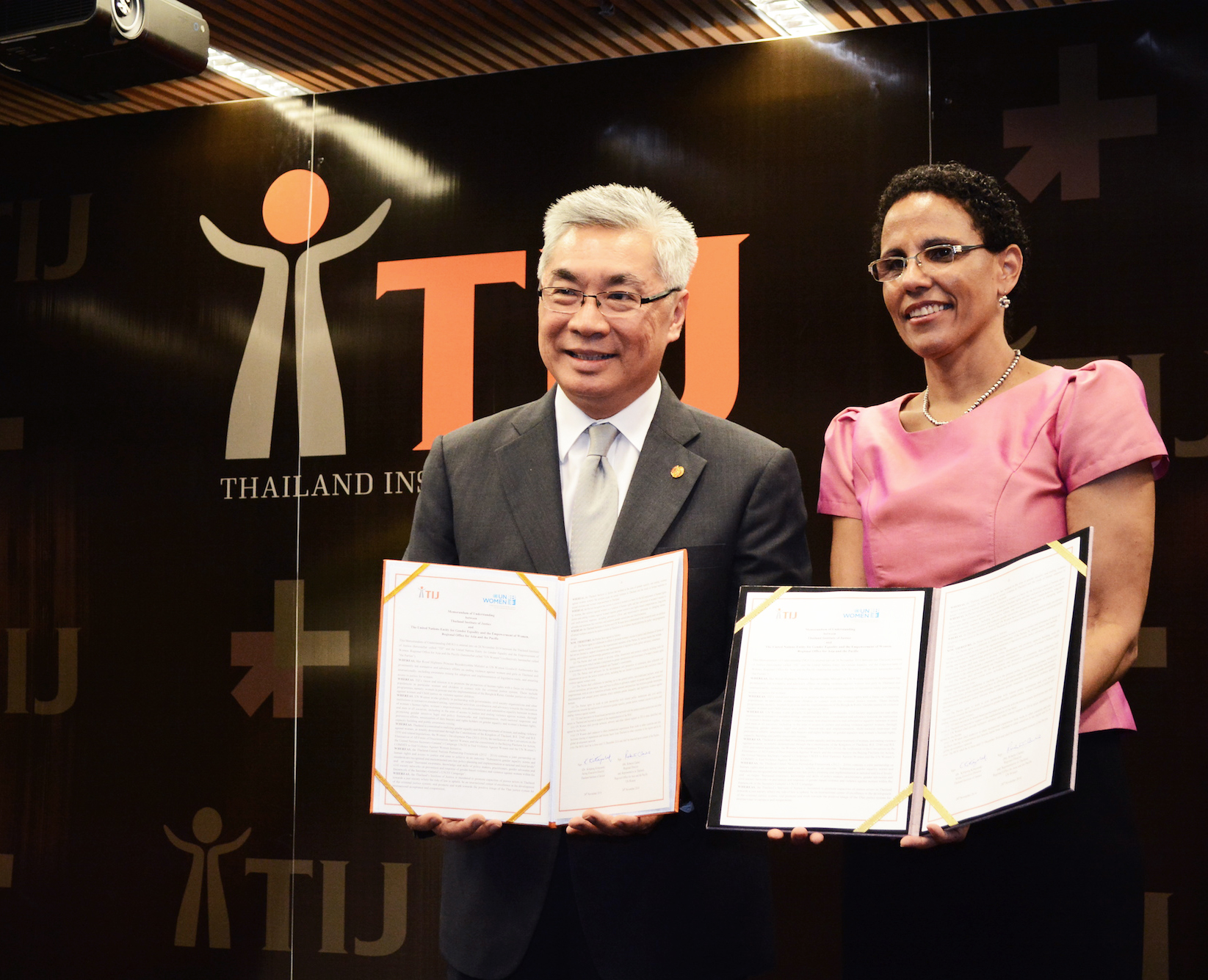 ‘HeForShe’ is a campaign movement to actively inspire men and boys to join the fight for gender equality and to commit to take actions against such inequalities and all forms of discrimination against women, including gender-based violence.  Such movement was originally conceived as a struggle led by women for women.  However, in recent years, men have begun to stand up to address inequalities and discrimination faced by women and girls.  The final objective of ‘HeforShe’ is the full enjoyment of women’s human rights and gender equality for all.