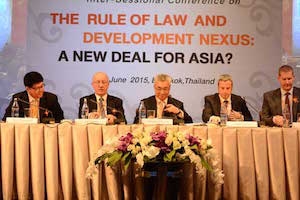 On 4-5 June, 2015 – The Thailand Institute of Justice (TIJ) co-organized with the Asian Society of International Law (AsianSIL) and the Ministry of Justice Thailand (MOJ) the “AsianSIL Inter-Sessional Regional Conference 2015” on “The Rule of Law and Development Nexus: A New Deal for Asia?”.

The conference was organized to promote research, education and the practice of international law in Asia. The focus was to support mainstreaming the rule of law, justice and security in the Post 2015 Development Agenda and to strengthen the rule of law and criminal justice system in Asia as a means to achieve sustainable development.

Linkages between the rule of law and sustainable development, relevance of international legal frameworks in response to threats of organized crime and drug problems, international law and the protection of women and children, the rule of law and justice reform and the ASEAN integration were addressed. Detailed report of the proceeding of the meeting highlighting substantives focus and conclusions will be released by TIJ in due time. 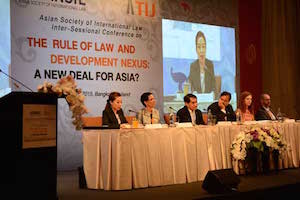 Professor Simon Chesterman, Secretary-General of the AsianSIL and Dean, Faculty of Law at the National University of Singapore welcomed participants and opened the conference.

Her Royal Highness Princess Bajrakitiyabha Mahidol, Chair of the Special Advisory Board to TIJ provided a keynote speech during the opening ceremony and also participated as a panelist in the second plenary on “International Law and the Protection of Women & Children”. 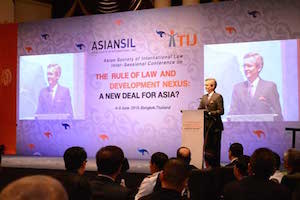 In the open plenary there were speeches by H.E. Mr. Direk Ingkaninanda, President of the Supreme Court of Thailand, H.E. Mr. Hassan Lahdah Saqr AL-Mohannadi, Minister of Justice of Qatar, and Professor Dr. Surakiart Sathirathai, President of AsianSIL, former Deputy Prime Minister and Minister of Foreign Affairs of Thailand and the Chairman of the Asian Peace and Reconciliation Council (APRC). 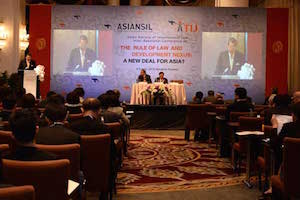 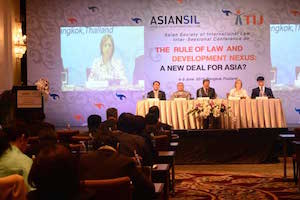 Panelists included the Director and Vice Chairman of Credit Suisse Asia Pacific, the Attorney General of Thailand, Former Permanent Secretary of Justice to Sri Lanka, Chairman of the Board of Mae Fah Luang Foundation, Thailand’s Ambassador and Permanent Representative to the United Nations at Geneva, President of Asia Justice and Rights, the Director of United Nations Asia and Far East Institute for the Prevention of Crime and Treatment of Offenders (UNAFEI), senior representatives from UNDP, UN Women, UNODC, UNICEF, professors from the National University of Singapore and Sogang University of Korea, and representatives from the Commonwealth Secretariat, Raoul Wallenberg Institute of Human Rights and Humanitarian Law, International Center for Transitional Justice, and the Asia Pacific Forum on Women. 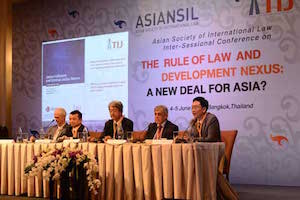 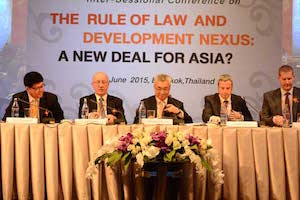 In parallel with the AsianSIL Inter-Sessional conference, TIJ also organized the TIJ Youth Forum on Justice and the Rule of Law. The purpose of the forum is to engage with and cultivate the rule of law principles among youths and to groom a new generation of young justice leaders. More than 60 undergraduate university students from 12 countries in Asia joined the forum to discuss the potential role of youths to promote the rule of law, public policy, justice and sustainable development at a global level. As part of the forum, the youths joined sessions of the AsianSIL conference and delivered statements on the outcome of their forum during the conference’s closing session.