The Nelson Mandela Rules: From aspiration to implementation

The Nelson Mandela Rules: From aspiration to implementation

By: Office for the Bangkok Rules and the Treatment of Offenders

Under the shadow of the ongoing pandemic, the Mandela Rules has become increasingly relevant to the correctional system more than ever.

One of the notable legacies Nelson Rolihlahla Mandela (fondly known as “Madiba”, translated to “Father of the Nation”) has left behind is the dawn of the narrative on prisoners’ rights protection, which ignites the global movement for humane treatment of the prisoners. After his 27-year of imprisonment in the course of his journey to seek equality, human rights, and democracy, he has shined a spotlight on the need to improve the rights and treatment of the prisoners. As he acclaimed in his book ‘Long Walk to Freedom’, “It is said that no one truly knows a nation until one has been inside its jails. A nation should not be judged by how it treats its highest citizen, but its lowest ones.” In 2015, the UN Standard Minimum Rules for the Treatment of Prisoners (SMRs) which was adopted back in 1955, were revised and adopted by the General Assembly and was named the Nelson Mandela Rules to honour his legacy.

The Nelson Mandela Rules, comprising 122 rules, were revised to improve nine thematic areas which cover all aspects of prison management, ranging from prison staff training to rehabilitation programs. Since then, the attention towards prison management has been elevated. There have been various efforts from its Member States in the past years to put the Rules into practice. Even though the Mandela Rules aren’t legally binding, they have been used as a reference to improve the prison system and guided policy reform in many countries and regions. For instance, in Europe, with the new progressive provisions of the Mandela Rules adopted in 2015, some provisions of the European Prison Rules (EPR), a guideline which regulates prison management in the region, were lagging behind the improved international standards. Thus, the EPR were revised and adopted by the Council of Europe’s Committee of Ministers in July 2020. Most of the revised rules are now aligned with the Mandela Rules and provide greater protection for prisoners. One of the key developments in the latest version of EPR is related to solitary confinement and it was guided by the Mandela Rules.

To reinforce the importance of the Rules, there are increasing tools and publications to support policy makers and practitioners worldwide. This includes the Guidance Document on the Nelson Mandela Rules: Implementing the United Nations Revised Standard Minimum Rules for the Treatment of Prisoners developed by OSCE and PRI. Also, the UNODC has offered several tools and launched the Nelson Mandela Rules E-Learning course to provide a better understanding and assist the practitioners in the application of the Rules.

Globally, the implementation of the Nelson Mandela Rules primarily lies with national prison administrations. In Thailand, this responsibility falls under the Department of Corrections (DoC), to work in collaboration with several partners including the Thailand Institute of Justice (TIJ). Since its revision, several pieces of research and projects have been undertaken in an effort to implement the Rules in the context of Thailand and the implementation is underway. In 2017, in collaboration with TIJ, the Thonburi Remand Prison was initiated as a pilot prison to begin to implement the Mandela Rules. In 2019, two more prisons, the Bangkok Remand Prison and Uthai Thani Provincial Prison, have also been selected by the Department of Corrections to further the implementation. To assist staff in implementing the Rules, the DOC has also organized Mandela Rules Workshop for prison officers to provide a better understanding of the Rules in practice. Thailand Institute of Justice, as a partner organization with a complementing mandate, supported the implementation of the Mandela Rules in Thailand through several research and capacity building projects. The TIJ has developed the Thai version of Nelson Mandela Rules tools including UNODC’s Assessing compliance with the Nelson Mandela Rules: A checklist for internal inspection mechanisms as well as the Nelson Mandela Rules E-Learning course to assist the Thai practitioners in obtaining the knowledge necessary for putting the Rules into practice.
The outbreak of Covid-19 has imposed a tremendous risk on the imprisoned as a vulnerable group and created an additional challenge for implementing the Mandela Rules. Some forms of the preventive and control measures that have been put in place during the COVID-19 affect the wellbeing of the prisoners. While the Mandela Rule 45 states that ‘solitary confinement shall be used only in exceptional cases as a last resort'. In some countries, prisoners face over 23 hours a day behind bars since the outbreak or haven’t received outdoor time for several months.
However, many countries have implemented various measures in support of their prisoners’ rights during the pandemic. For example, technologies such as video calls and an online live stream have been introduced in prisons to connect the prisoners with the outside world. In Algeria, Burkina Faso, and Nigeria, the prisoners have been able to reach out to their legal representatives, and visitation is also allowed if necessary. In Thailand, from April to mid-July, there have been over 37,000 positive cases detected and 47 deaths in Thai prisons. The DoC, with support from the Ministry of Health, has implemented active Covid-19 testing measures and has begun the vaccination program for prisoners and prison staff across the country. To also address prisoners’ rights on family visit and speedy trial, prisoners’ court hearings are continued through video conference. They also are able to keep in contact with their relatives by video call via Line application in which the visitors can make an online appointment through each prison’s Line QR code. These measures can be seen as the attempts from the authorities to preserve the rights of the prisoners during the prison lockdown.

The explosion of Covid19 cases in prisons around the world evokes the discourse on the vulnerability of prison and the imprisoned people, reaffirming that the principles and provisions contained in the Mandela Rules are more relevant today than ever. There may be a long way to go for countries around the world to entirely reform their prison regimes to be in compliance with international human rights laws. That said, the Mandela Rules will be one of the benchmarks as well as guidances in the time of crisis to ensure that we have done everything necessary to ensure prisoner’s safety and protect their inherent dignity as human beings.

In order to shed light on the situation in Thailand and reaffirm in the importance of the Nelson Mandela Rules, the Thailand Institute of Justice in collaboration with the UNODC will hold a webinar under the topic of “Prison Management during the COVID-19 Pandemic and the implementation of the Nelson Mandela Rules” on July 29th, 2021 starting from 2 PM Bangkok time (via Zoom). Please click here to register.

The webinar is available in Thai and English. 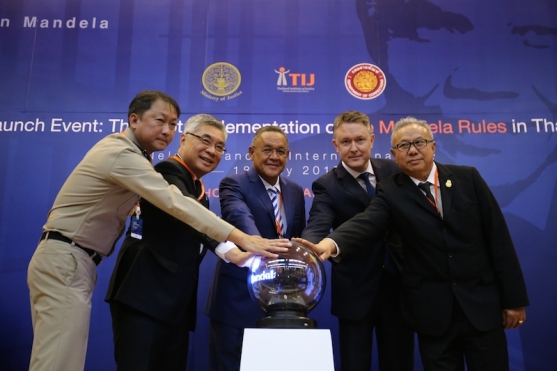